Choose the guided tour of your choice, go to the starting point then follow the voice of your guide from your smartphone

Guided tours, but not only

Upgrade your guided tour with the activity of your choice: a cruise, food along the way, a bus tour and many others

Barcelona: The wonders of architecture

DISCOVERING THE WONDERFUL CITY OF BARCELONA

How about a little stroll through the streets of Barcelona? Its 1.6 million inhabitants make it the largest city in Catalonia and the second largest in Spain. Barcelona attracts many visitors every year with its main monuments, such as the Sagrada Familia, the Casa Batllo, the Palau de la Musica Catalana or the Casa Milà. And with its beaches, its sun, its terraces, its gastronomy, its culture, as well as its respect for traditional businesses, it’s not really surprising that Barcelona is one of the most visited cities in the world!

Let’s discover Barcelona by walking through the streets of its most famous districts. We’ve put a lot of effort to create the most interesting three self-audio guided tours to be done in the street directly from the Rewind app.

Do you love history and charming little streets? Choose our Gothic Quarter walking tour, the oldest and most visited area of the city. Here you will find the main monuments that have witnessed the great history of Barcelona, such as the famous Cathedral. Through streets and squares where charm and tranquility coexist, you will discover how Barcino, a small Roman colony with no particular status, became the current famous Barcelona as we know it. You will also learn that the Gótico was the source of inspiration for famous movie directors such as Woody Allen, but also the witness of terrible bombings during the Spanish Civil War…

You will also discover the history of the Jewish community and walk the famous Plaça Reial and the Rambla.

And what about Gaudí? It’s impossible to visit Barcelona without mentioning and admiring the sumptuous works of the famous architect of the Sagrada Familia! Let’s take a look at the wonders of architecture. You will discover examples of the architectural movement that developed in Barcelona at the time of Gaudí, at the end of the 19th and beginning of the 20th century. A style that we call here “Catalan modernism”. The Palau de la Música, the Casas Pons i Pascual, La manzana de la Discórdia: a festival of shapes and colors awaits you!

Do you prefer beaches?  How about a nice walk along the sea then? You will discover the intimate relationship between Barcelona and the sea. Admire a magnificent panorama towards the sea and the city from the port of Barcelona and enter the Barceloneta district, which is THE marine district of the city. Finish your walk with your feet in the sand, on the main beach of Barcelona.

VISIT AT YOUR OWN PACE

How does it work? Choose the tour of your dreams, download the Rewind application and go to the street, to the starting point. Then follow the guide’s voice from your smartphone! The stories, all written by local guides and recorded by professional actors, will automatically trigger according to your GPS location. In other words, you won’t have to do anything but walk and keep your eyes (and ears;) wide open.

The advantage of this format: visit alone or with your friends and family, far from the tourist groups! Start your walk whenever you want and enjoy unbeatable prices for a high quality product.

Create your own unique tour experience 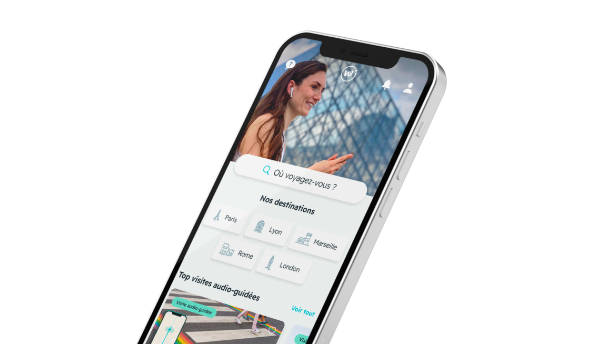